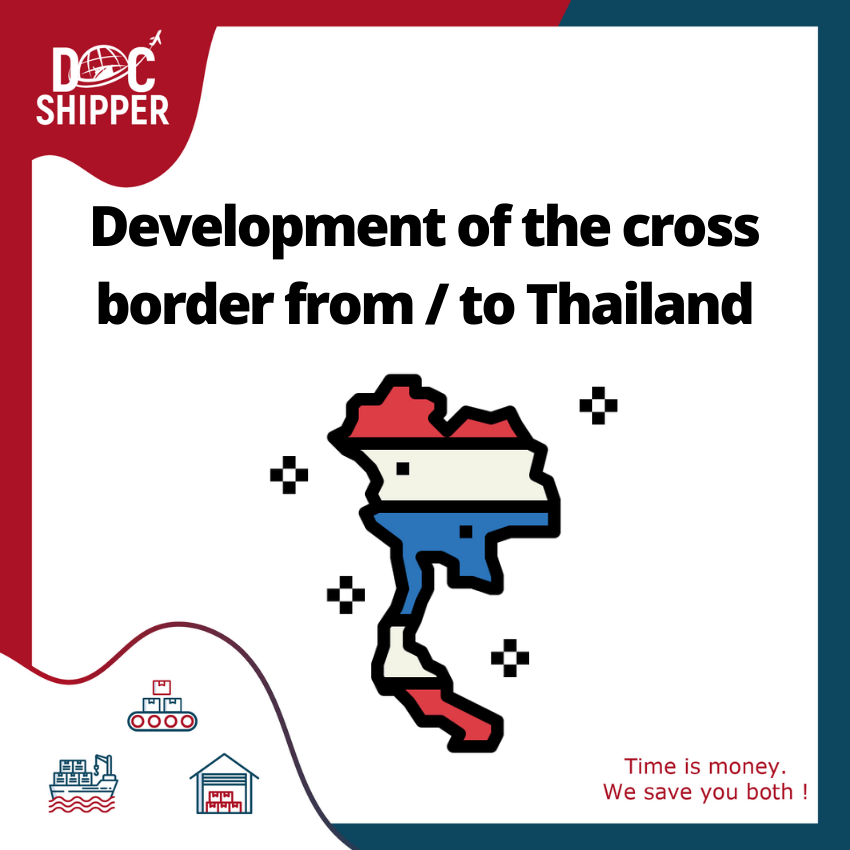 Border Trade: A Future Direction or the Thai Economy in ASEAN

The near future, it seems certain that Thailand will 11 become a hub for land-based trade in Southeast Asia and a gateway for the movement of goods through the region, because of its strategic location at the heart of the ASEAN Economic Community. As a result, the country will enjoy an increase in the value of cross-border trade transactions as well as more tourist arrivals, consequently boosting the Thai economy.

This optimistic forecast is based on my belief that land transport through Customs checkpoints along Thailand’s borders will overtake marine transport as the main channel for regional trade because trucks and trains take less time.

Docshipper Remark : Moreover, the ronde of trade will evolve from simple border trade to exports and imports across borders as well as transit trade that passes through one or several countries on road to its destination.

These are not new claims and I do believe that business operators and the private sectors generally may be skeptical about the preparedness of Thailand’s government agencies to cope with this major and complex trend in order to take full advantage of it.

In making the forecasts, I am taking into account the context and environment of regional collaboration; the direction in which our neighboring countries and other ASEAN nations are developing; investment flows from the world’s biggest economies to Thailand and other ASEAN Member States; and the preparation of Thailand’s public sectors in terms of infrastructure, amendments of laws and regulations to facilitate the business, and simplification of working procedures for the ease of doing business.

Significantly, the value of Thailand’s border trade has continued to increase (see the Tables below), despite of a slowdown in the global economy brought about by the economic downturn in China and a consequent weakening of the Japanese economy. Trade and investment in Thailand and other ASEAN Member States continue to expand. Before elaborating on the preparations already made by the public sectors for this transformation in regional trade, I will lay out some background.

At the end of 2014, the population of the 10 ASEAN Member States that were a year away from becoming the AEC was about 637 million. In descending order of numbers, this comprised Indonesia, about 254 million; the Philippines, 108 million; Vietnam, 93million; Thailand, 68million; Myanmar, 56million; Malaysia, 30 million; Cambodia, 15 million; Laos, 7 million; Singapore, 6 million; and Brunei, 400,000. It seems likely that in the future the economic integration of the 10 ASEAN Member States will be extended to include China, South Korea and Japan, a grouping that is currently known as ASEAN+3. This will entail a quantum leap in market size.

This would create a trading bloc with a population well in excess of three billion. Bilateral and multilateral free-trade pacts have been a major feature of increasing levels of economic integration within the geographic region encompassing the ASEAN+6 grouping.

These trends have stolen the limelight from the development of regional transport networks and economic-development zones along three major ‘economic corridors’, which include:

These include the following bilateral pacts:

All of these developments are creating a momentum that is reflected in recent figures for the value of Thailand’s border trade:

Docshipper Note : As the pace has risen, every involving government agencies has developed and adjusted their work.

The Customs Department, the main tasks of which are to facilitate and control cross-border trade, protect society and environment, collect tax revenues as well as investigate and suppress illegal Customs-related activities, has issued numerous measures to support border, cross-border and transit trades. These measures also implement under the ASEAN Economic Cornmunity, e.g. the elimination of tariff and non-tariff barriers, amendments of rules of origin, revision/update of regulations/working procedures, etc.

The Department’s trade facilitation measures that will help to out transaction costs of doing business include:

Docshipper Remark : To prepare infrastructure and Customs checkpoints, the Customs Department set up a working group to study the evolution of border trade, develop and redesign certain Customs Houses to launch Common Control Area related pilot projects, taking into account the enhancement of border trade and the creation of Special Economic Zones.

The Customs Department is also planned to renovate Customs Houses and border checkpoints, construct new office buildings, including working facilities for Customs officials to enhance the efficiency of existing services for business operators and people in general.

New Customs Houses, in some cases with associated facilities, will be built in Chiang Khong, Nakhon Phanom, Chiang San, the Ban Pu Nam Ron permanent checkpoint in Kanchanaburi province, and the Chiang Khong Customs House. Furthermore, opening and closing times of border crossings have been extended to match those of permanent border checkpoints to facilitate the movement of both cargo and travel.

Docshipper Remark : Hence, a major effort is under way to not only provide the infrastructure for increased land-based trade, but also to enable trading across the entire region faster and more convenient.

The international commitment to this massive integration is attracting increasing flows of investment from the world’s biggest economies into Thailand and other ASEAN Member States. It is difficult, in the light of all these factors, to be anything but optimistic for the future.